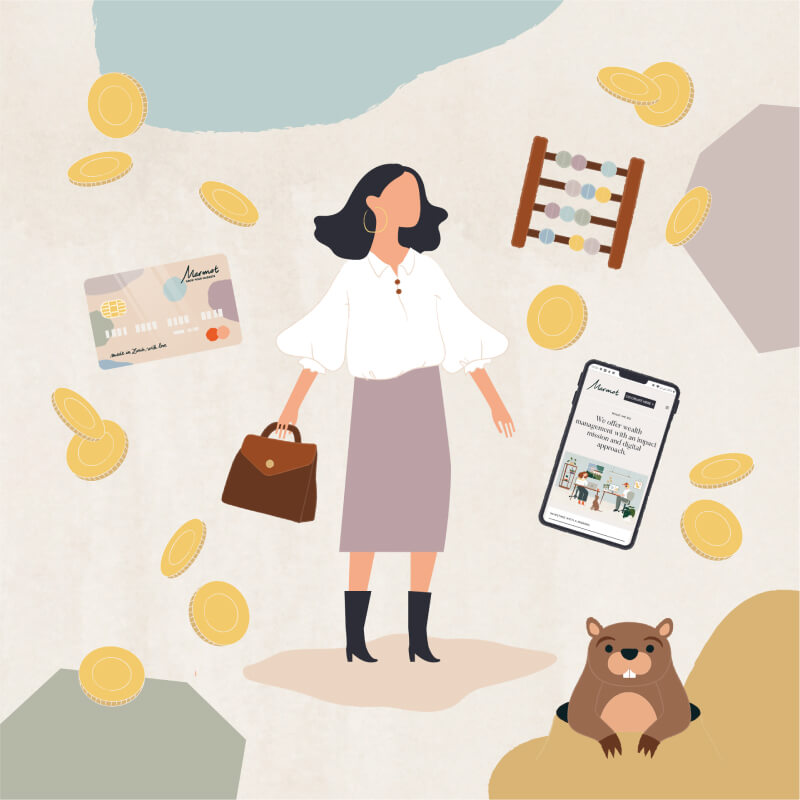 The chart shows the interest rate hike cycles of the Federal Reserve (FED) since 1988, confirming the observation from the chart of the month. The FED has never allowed interest rates to rise so sharply in such a short period of time.
How should one adjust one's investment policy to such special events? The answer is simple. You shouldn't. You have to set your investment policy for the long term and stick to it even in crises. If you adjust your investment policy after such extreme events, first of all you will be too late and secondly you will be right in 2% of market situations, but wrong in 98%.
That is why we have changed very little in the model portfolios this year, except to adjust the cash amount now and then.
To determine the long-term investment strategy, we stick to the following framework:

The concept can be used both in the long term, for an economic cycle that lasts 8-12 years, and in the shorter term, over 1-2 years.
In the long-term view, we are probably somewhere between worry and hope. Interest rates are likely to continue to rise for 1-2 years and have a strong impact on both bond and equity markets.
In the short term, over 1-2 years, we are currently somewhere between pessimism and resignation. This means that a major recovery is possible in the short term.

The chart shows the number of times the terms "corporate bankruptcy" and "recession" are mentioned in financial publications. A recession also means more corporate bankruptcies.  Normally, therefore, the mention of these two terms in publications goes hand in hand.
The discrepancy either means that recession fears are completely exaggerated or that we are facing an unprecedented wave of bankruptcies.

The chart shows the course of the S&P 500 in the 23 bear markets since 1900, namely 2.5 years before the peak and 6 years after the peak. The black line corresponds to the current course. Typically, 1-1.5 years after the peak, stabilization and recovery occurred in 17 cases and only in 6 cases things got worse.
‍

In the next few weeks, the publication of the company results for the third quarter is due.

Expectations are quite sporting, so there are likely to be a number of disappointments.

The chart shows the course of the earnings reports of the companies in the S&P 500 in the last 23 bear markets since 1900. At least as far as the company results are concerned, we are in the solid midfield in the current bear market. This makes a further sharp drop in stock market prices rather unlikely.

The chart shows the price/earnings ratio expected in the next 12 months. The excessively high valuations of 2021 have already been strongly corrected. These are not yet bargain prices, but they are definitely fair valuations.

Debt in America at record level.

Due to the current political turmoil, most investors are not paying attention to how much debt America has. Normally, this is a big issue in America in a mid-term election year. We expect this to become an issue again sooner or later and put pressure on the USD.
In Europe, government support packages are currently being put together to cushion the high energy prices. In the US, this could soon become an issue as well.
What unsettled the markets at the end of last week was the decision by OPEC+ to reduce oil production volumes in order to keep energy prices high. This can be interpreted as a clear stage win by Russia over the US.
U.S. President Biden released U.S. strategic oil reserves in recent weeks to depress oil prices and increase the chances for Democrats in the midterm elections. The polls then also turned in favour of the Democrats.

The graph shows the change in strategic oil reserves in the U.S. over the last 10 years. A 25% reduction over one year is unprecedented. Biden has maneuvered himself into an uncomfortable position here and OPEC or Russia has caught him on the wrong foot. One month before the mid-term elections, energy prices are likely to rise again in the U.S. as well.