Should you rather invest in big or small companies? 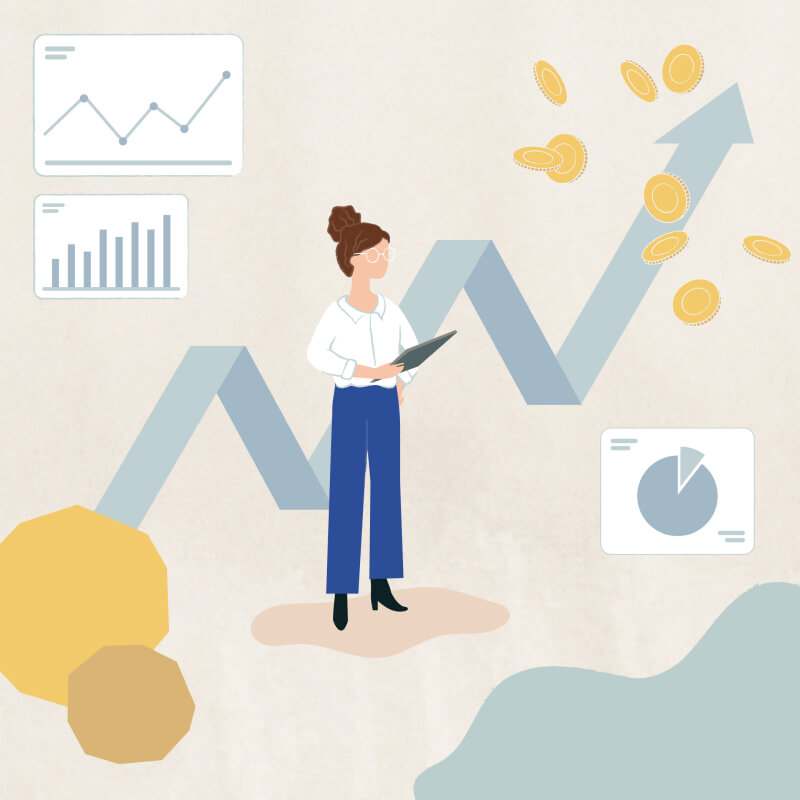 In our view, this is due to two factors:

- Higher leverage due to extremely low interest rates, many firms are borrowing a lot to grow faster. Large companies with a lot of collateral find it easy to get larger loans from banks or to place bonds.

- Share buyback programs: large companies borrow much more often to buy back their own shares than small companies. This artificially drives up the share price.

Due to the very low interest rates, large companies have advantages on both counts. Only when interest rates are higher should a shift in portfolios from shares of large to small companies be worthwhile. Based on current forecasts, this should not be the case until the middle of next year.

How the professionals position themselves in the markets

Every quarter, Bank of America conducts a large survey of the largest investors (banks, asset managers and wealth managers) on how they are positioning themselves in the stock market and what they expect for the next few quarters. In the past, it has been very helpful to take a closer look at this data, as it has great predictive power.

The outlook on inflation has deteriorated:

As of now, 61% believe that the inflation figures are only temporarily high and that they will soon weaken. The camp of optimists has increased. The camp of pessimists is getting smaller. The central banks were able to convince investors with their arguments.

This is additionally underpinned by the following chart:

In the last 20 years, major investors have never been so pessimistic when it comes to future bond returns.

This attitude is also being consistently applied to equities:

In equities, large investors are targeting positions to sectors that benefit from longer and higher inflation. These include commodities, banks and equities in general.

Investors were also asked which investment style they prefer for the next 12 months:

Investors still prefer quality stocks, but it is interesting to see how forecasts have shifted since last month. The triumph of substance (value) stocks seems to have stopped. Many investors are probably convinced that growth stocks have corrected so strongly that it is worth getting back into them. The camp of advocates of growth stocks and substance stocks are now roughly equal.

The survey also supports our statement on the chart of the week. As before, large investors see higher returns in large companies than in small ones. But the conviction is steadily declining.

Satoshi Nakamato is the pen name of the inventor of Bitcoin. This can be a person or a group of people. For years, the crypto scene has been puzzled over who is behind the name. In the next few weeks, the mystery could finally be revealed.

Like everyone else who launches a new cryptocurrency today, first covers himself with coins. Satoshi Nakamato has also done this and owns 1 million Bitcoins. These would have an equivalent value of over USD 60 billion today, making Satoshi Nakamato the 20th richest person on earth. If the Bitcoin price rises above USD 150,000, which is still a conservative prediction for some banks, he will be the richest person on this earth.

On October 31, 2008, a user by the name of Satoshi Nakamoto published a basic paper outlining the concept of Bitcoin. Then for the next 2 years the same person started the protocol and he had active contact via 2 mail addresses with other developers. Then the contact broke off.

In May 2016, Craig Steven Wright claimed to be Satoshi Nakamoto. However, the crypto scene doubts this, mainly because he does not back up the claim with a trade. The 1 million Bitcoin have never been moved nor even 1 Bitcoin sold since 2008.

Now Craig Steven Wright is being sued by the family of the late David Kleiman in Florida. The family claims that Wright and Kleiman wrote the base paper together and were partners. Therefore, David Kleiman and now they as his heirs, would be entitled to half a million Bitcoins. The legal process will likely release many details from the founding days of bitcoin.

However, it may also be that Wright and Kleiman are good con artists and are just playing high poker. The real Satoshi Nakamoto enjoys watching the madness. He can walk around the world with his head held high and free from all the paparazzi, knowing he is one of the richest people in the world, but no one knows it.